Audrey M. Edmonson understands the importance of building strong, safe and economically successful neighborhoods throughout Miami-Dade County.  During her 15-year tenure on the Miami-Dade County Commission, Edmonson has been an effective advocate for health, transportation, social justice, small businesses, and cross-cultural understanding.

As a representative of the Miami-Dade County Sister Cities Program in 2007, Edmonson signed an agreement with the City of Cape Town, South Africa, and the City of Dakar, Senegal, establishing Sister City ties and thus fostering trade and cultural exchanges.  "International trade is one of Miami-Dade County's most important drivers, creating vital jobs throughout our community,” said Edmonson. “We need to nurture our two-way global commerce to continue to create new opportunities for women-owned, minority-owned and other small businesses in a wide range of economic sectors."

Born in Liberty City, Edmonson holds a bachelor's degree in psychology and a dual master's degree in marriage and family therapy and mental health counseling. She has been active in local government since 1999, serving as mayor of El Portal before first being elected to the county commission in 2005. She began her two-year term as chairwoman in December 2018. Her many activities today include serving in the International Trade Consortium as vice-chair, the Miami-Dade Economic Advocacy Trust, and Project PEACE: People Engaged and Advocating for Community Empowerment.

Marie Gill is a champion for women and minority-owned businesses, helping them compete in global markets.  As founder and CEO of M. Gill & Associates, Inc., she provides economic development and specialty consulting services, and advocates for the inclusion of minorities in government contracts and financing.

“The global marketplace is changing and 80 percent of the world’s purchasing power, 90 percent of economic growth, and 95 percent of consumers will live outside of U.S. by 2030,” she said. “Miami is a gateway to the world at the epicenter of the Western Hemisphere, making it easy to navigate international trade activities."

Born in Jamaica, Gill earned her bachelor’s degree in economics from the University of the West Indies and two masters’ degrees from the University of Toronto. She settled in South Florida in the 1980s, and was the first black and the first woman to be awarded the federal contract to operate the U.S. Department of Commerce’s Minority Business Development Agency (MBDA) programs throughout the state in 2001. Through MBDA programs have, Gill has facilitated more than $4.3 billion in contracts and financing for minority and women-owned businesses, creating and retaining more than 12,000 U.S. jobs.​

Gill’s leadership in the community led to Jamaican Consulate to select her as the volunteer president of the Jamaica USA Chamber of Commerce 15 years ago. “This has provided a bridge for me to engage more Caribbean Americans in federal contracting and in growing exports from Florida to the Caribbean.”​

Gil founded the National Association of Caribbean Businesswomen, which focuses on helping young girls to succeed in their academic and business pursuits.  She represents Jamaica as vice president of Florida’s Bi-National Chambers of Commerce, serves on the Coalition of Caribbean Chambers of Commerce, and hosts the annual Minority Enterprise Development Week Conference – Florida’s signature event recognizing the contributions and accomplishments of minority businesses.

As consul general of Canada in Miami, Susan E. Harper provides leadership to enhance Florida’s relationship with Canada, a key trading partner for the state. She is active on trade, security and energy-related issues, as well as providing commercial and consular services to Canadians.

Prior to moving to Miami in 2016, Harper held two consecutive positions in Global Affairs Canada in Ottawa. She was director-general and senior arctic official, heading the Canadian delegation to the Arctic Council, and director-general, Trade, Controls, and Technical Barriers.​

She was posted to the Embassy of Canada in Washington DC, in 2004, where she became Minister (Economic) in 2008. She had previously been Ambassador in Montevideo, Uruguay, after having held trade positions in Yaoundé, Paris and Buenos Aires. Before joining the Government of Canada, Harper taught at Cambrian College in Sudbury, and George Brown College in Toronto.​

Harper earned her bachelor’s degree from Queen’s University and master of business administration degree from Western University. She has two children, who keep her academic, financial management and diplomatic skills honed.

Karen A. Kuhn has more than 29 years of federal service with the Department of Treasury, the U.S. Customs Service, and U.S. Customs and Border Protection (CBP).  She has been the CBP associate chief counsel (Miami) since 2004.  In this role, she is in charge of the legal services provided to CBP in ten states, Puerto Rico, the U.S. Virgin Islands and the Preclearance locations in Bermuda, Bahamas, and Aruba.  She is also charged with providing legal resources to two active Centers of Excellence and Expertise – the Agriculture and Prepared Products Center in Miami and the Consumer Products and Mass Merchandise Center in Atlanta.​

Kuhn has extensive experience in trade enforcement, including trade-based money laundering and smuggling.  She leads the legal effort to address commercial fraud and smuggling throughout the region so that CBP can facilitate legitimate trade through U.S. ports.  She has worked on trade matters throughout her career, and legal work has been recognized twice with CBP Commissioner’s Awards.

Kuhn earned her J.D. from the National Law Center at George Washington University.   She also holds a master’s degree in international affairs from GWU and a bachelor’s degree in political science and a certificate in Russian and Eastern European studies from the University of Pittsburgh.  She also graduated from the Senior Managers in Government program at the Kennedy School of Government, Harvard University.

Christine Valls was named American Airlines' Vice President of Sales for Florida, Latin America, the Caribbean and U.S. Latin in 2018. She is responsible for the airline’s passenger sales revenue, agency and corporate relationships in these geographical markets.​

Christine joined American Airlines in 1991 as a Customer Service Representative. Since then, she has held numerous management roles across American in departments including Sales, Sales Planning and also leading American’s interactive marketing efforts in Latin America and the Caribbean. Most recently, she served as Regional Sales Director for Mexico, Central, and South America.​

Christine holds a Bachelor’s degree in Business Administration from The American University in Washington D.C. A Florida native raised in Puerto Rico, she is fluent in English and Spanish and speaks conversational Portuguese.  She currently resides in Doral, Florida with her husband and two children. 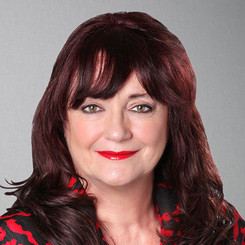 Ms. Gallogly is the Founding President of the World Trade Center Miami, Inc. (WTCM), which is Miami’s oldest global trade organization and a recipient of the U.S. Department of Commerce’s “E” Award for excellence in the delivery of export services.

As Founding President, she was responsible for directing trade associations that involved the management of programs for international executives engaged in international business.  Among the many activities she managed were the Air Cargo Americas Show, Americas Food and Beverage Show, etc.  These shows generated more than $3.8 billion in international sales and were visited by more than 250,000 international executives. Additionally, the Center managed trade information and e-commerce systems and advocated trade policies and agreements that increased imports and exports.

Previously, Ms. Gallogly served as Director of two departments in the City of Miami, Economic Development and International Trade Promotion, and the offices of Protocol, Public Relations and Communications.  In these positions, she developed the city’s first Strategic Plan for International Trade Promotion and led trade missions to gateway cities in Asia and Europe.  She administered domestic and international trade investment and business retention programs, developed international marketing programs and established trade referral systems with statewide and international trade organizations to increase international business opportunities.  Also, she served as the City’s ombudsperson for local businesses and coordinated minority business development and loan programs.

Ms. Gallogly is a member of the global Board of Directors of the World Trade Centers Association.  The Association is comprised of World Trade Centers located in 327 cities in 90 countries with a corporate membership of more than 2 million international companies.  She has received numerous awards including induction into Miami’s “International Business Hall of Fame”, the “Miami International Pioneer Hall of Fame”, Florida’s “International Business Executive of the Year” award for services, “Person-of-the-Year” award from the Florida Customs Brokers and Forwarders Association, “Miami Pioneer for Progress Award” and “Game Changer of the Year” Award from the Greater Miami Chamber of Commerce.

In her capacity as President, she instituted Miami’s celebration of the United Nation’s “International Women’s Day” initiative which has honored 87 women executives in international trade over the past sixteen years. She received a MA from George Washington University.  As an entrepreneur, she has been an exporter/importer, owned a Burger King, served as a general contractor for commercial real estate projects and served on a number of international business organizations.

CAMACOL - Latin Chamber of Commerce and Industry of USA

Receive the latest updates, information and event listings for the international trade community in Miami. Complete this form to get our newsletter delivered directly to your inbox.

In 2020, The World Trade Center Miami debuts an updated newsletter format with international business industry news, trade spotlights and upcoming events. Click on the image to read this month’s edition of our newsletter.

Learn about the CBTPA & GSA with Lenny Feldman and Nicole Bivens from Sandler, Travis and Rosenberg, P.A. Get a legal perspective and the current status in the policy.

The global landscape is changing and so has demand